I took the top for a coat of lacquer in part to keep it clean but also to give me an idea of the end result it also helps promote me to be careful with a finished item, yes it looks good from a distance, the padouk has bled into the maple not every where but oddly enough it mostly happened at the corners, I should have known this was possible as I had wiped it with a solvent at some stage and stained the whole area red which then had to be sanded out, fortunately I have the thickness there to stand a good sanding. I have experimented with giving a spare piece of the banding a coat of water based polyurethane no bleeding then  had the lacquer applied on top of that, to date there is no adverse effect. 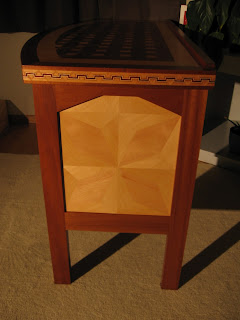 As a result of the Queen having a birthday in NZ the top now has some legs, for the photo the top is just sat on the leg there are no draws yet, thoughts of these are on going as there is a 140mm difference in the two draw sides which means that on the long side a lot of draw will be left inside the cabinet when fully open.
I did wonder if I was overdoing the detail of this piece but now I see it at this stage I am pleased, the creativeness is satisfied thus far.
Posted by srgb at 9:09 PM No comments:

The end of Autumn

The end of May let us know winter was upon us with this stunning morning view of the sun rising and hitting the mist that still lay in our valley, it was a chilly morning for Auckland considering may is not a winter month I am sure we will get colder yet and good views but not always the time or inclination to get out the camera.