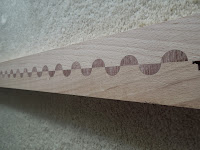 I have a stack of Oak, short and wide, I have some long pieces of European Beech.
The dining table is looking shabby and needs to be bigger to accommodate 2 laptops the morning paper and food.
I saw an inlay patten somewhere I can't remember it, this is my version and if all my plans eventuate it will appear in various places on the table and maybe slightly different.
This is the European Beech with a Sapele inlay, the inlay is 20mm diameter so the half is 10mm X 20mm wide, and the piece I show here is 1650mm long and has 84 pieces inlayed. 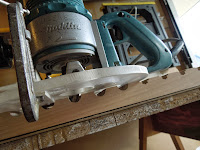 I started by making a short sample to confirm I had what it takes and that I could be successful, I learnt its important to be square with these cuts as later I would cut the piece in half and roll it over on itself move it along 20mm and glue it together to give the above result, a close look or enlarge the photo and you will see the shape of the cutter also that I had taken out the meat of the cut using the table saw. 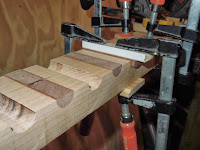 The cut sizes was easy to maintain it was the space between that was difficult to maintain and getting the thickness of the Sapele correct so when I put the round on the fit was correct and snug, I had cut the Sapele wide enough to do one and a half pieces so every third piece is joined in the middle but that join will disappear when the length is cut in half later, much of this thinking is about my machinery's capabilities and about not handling small pieces of wood on machines bigger is better within the machines ability. 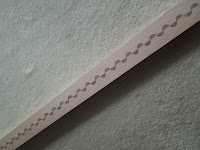 There are a few burn spots but nothing enough to show on the finished product I hope, gluing in the half rounds was slow with limited cramps and I found it better to glue in every second one to allow for room to tighten the cramps, I cut the inlays 1mm big and dressed them of when dry, I did wonder how my thicknesser would handle the end grain so cut as closely as I could using the table saw, I have used pva through out to give a clean a glue line as possible.

This block will eventually be split into 4 pieces 5mm thick and used on both sides of 2 crescent shaped rails that will hold table legs together, I will form a tenon on the end and the legs will have a mortice, I am thinking a long tenon to protrude from the leg with a mortice in the end then use a wedge to hold in place, a Sapele red wedge would just complete the contrast.

Pleased I made the effort 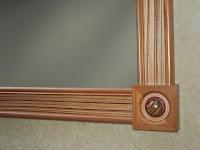 I so much wanted to have a go at rose corners, I wanted to use that piece of mirror, to give it new life, the strips of Zabrano veneer were sat in the cupboard screaming to be let out and be seen.
Of all the router cutters I have nothing would give me that V and round on the inner molding, I achieved it by putting the circular saw on a 45 degree then a lot of careful hand sanding.
I did get a little confused about how the corners would be orientated but luck was on my side and all ended better than I would have imagined. 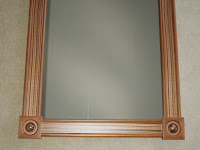 The photos are taken after being lacquered and with the mirror in place, I layered it on the floor so the reflection is of the ceiling with the sun coming through the window, it would have been easy to have toes and hands holding camera in the photo, its a fact of life that in a photo it looks to be diminishing but in reality our eyes adjust and we see a real square so make allowances for the photo. 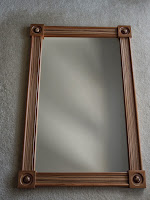 If there is one place MDF board is good it is as a stable backing for veneer, I did veneer the back too so there is even tension to avoid any risk of bending and now with those edges glued on there is no MDF to be seen.
The overall size is 1150 mm high and 750 mm wide the glass is 4mm so it has become heavy and I will reluctantly use 4 mirror brackets to fix it to the wall, I hate putting holes in the walls but then I can't have it stood on the floor.

A Burst of Enthusiasm 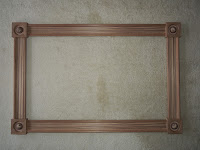 These pictures are taken with the frame layed on the carpet so there is no reflection from the mirror, I always expected it to be hung vertically on a wall but now see it looks good like this. 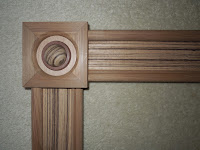 The rose corners have become smaller due to discovering a nail hole in the second time around rimu that I cut out, but funny how things work out as I think it looks better than it would have done.
There are a few finishing touches to go, a little strengthening behind to take a heavy mirror, a back of thin ply then a coat of finishing lacquer. 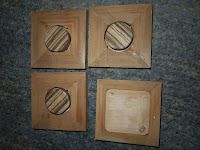 I found some mirror some time ago, it has sat in the garage and I worry I will break it someday, so time to frame it and hang it on the wall. 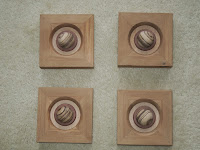 I wanted an elaborate frame and have wanted to do rose corners, I have long narrow strips of Zebrano veneer for the sides so had to have some on the rose corner. 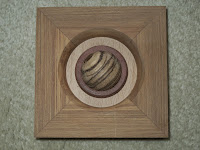 These blocks are 115mm square with the outer part being Rimu, old weather boards with the paint removed and the nail holes cut around, the light wood is European Beach and on top of that is Jarrah, the Jarrah is from a beam that was removed from a building that was built in the 1840s, both Zebrano and European Beach are left overs from jobs I have done in the past.
Between the corners will be moulded Rimu on either side of the Zebrano veneer. 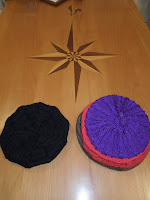 I decided I had been too intense and needed to slow down, you know, take a walk, smell the roses,veg out and sleep in.
Then I look at the blog and think, I haven't been up to much recently and don't remember smelling the roses.
I stood and watched my other half knitting yet another hat and realised someone had been up to much, she tells me there are more and that 3 have found other heads to keep warm, I put them on the table to photo and couldn't resist including the compass point I put into the table years ago. 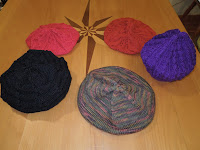 Back to the hats, I have become guardian of the black one as I like the patten, the patten is different on each one which is incredible clever I think as she has not had knitting needles in her hands for so long, and they feel just nice to hold.


Then I realised I had been up to something. 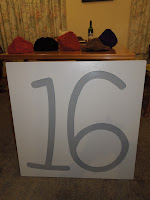 The house has only ever had a shop bought number stuck on the letter box that at times we have colored up again with a felt tip pen so it became time to let the world know where number 16 is.
I cut the number about 3mm into the board of exterior ply using a router free hand, I had looked at fonts and decided on this one as I think it is informal.
I painted the groove first as it was then easy to roller on the lighter color last.
I have to dig a hole for a post as I intend to use the number to help hold up my rather wobbly letter box. 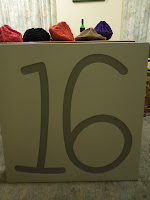 And there are lots of hats to keep number 16 warm during those long cold nights at the bottom of the drive. 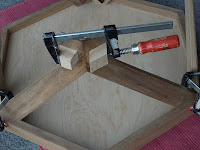 I have been some time putting these legs together and today I made the 6 legs into 3 legs, in order to be able to glue them together tight I have temporally glued blocks on cut at the correct angle to enable a cramp to pull them together, I have a biscuit in the joint and glued using epoxy with some brown oxide, with the legs being handed it requires 2 settings to do that 30 degree cut, eventually I will screw the top end to the back of the edge around the top. 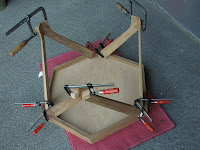 I made the legs for the first Teak table from solid teak and it split a number of times and I did a lot of gluing bits back on I was not happy about the first ones so made it very difficult this time by laminating the teak around 3mm ply I of course had to clash the edges and the edge with the curve was the challenge as can be seen in the bottom photo. 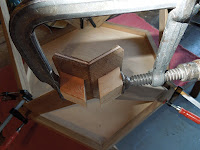 I also have a nice taper on them being 10mm at the bottom to 20mm at the top, this time I went to the trouble of making a jig and
fed them through the thicknesser giving me a much better result than on the first table where I dropped the legs on the buzzer and went from nothing to a set depth.

I am pleased I have taken the time on this one and now intend putting a slight bevel around the top to take away the square look.
Posted by srgb at 10:11 PM No comments: 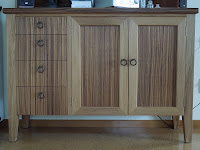 
I made this piece of furniture about 9 years ago, I was looking around to see what I could do a post about, this piece sits in my kitchen so here it is to share and see if it brings any comments. 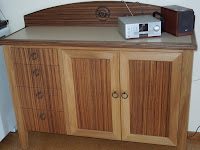 The stripy wood is out of Africa and is used for effect so much so that a copy has been man made or should I say man made Zebrano is available but this is the real stuff, the ends of the unit looks just like the door, the other timber is New Zealand Rimu I can't remember where the Rimu came from but it would have been left overs or had defects that I would have worked around as I made this, the Zebrano was all left overs from some doors that I had made for an office. 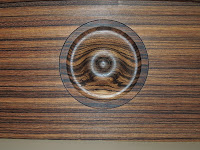 I enjoy seeing the piece but if I was to make it again I would do it differently however I also like to see other peoples reaction 'cos its different most don't know how to react on seeing it, I also like to see the inset rose in the up-stand unfortunately it is usually obscured by all that collects on there.
It is finished with just an oil so has a mat look about it.
Posted by srgb at 8:12 PM No comments: