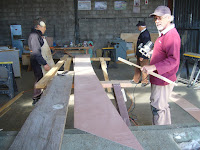 I have wanted to find interest outside my home renovations for some time now, I have visited the local Menz Shed over the past year for some social interaction, I had mentioned using the plans I have and build a canoe with the hope of getting a team build going and maybe get others interested as a way of improving skills. 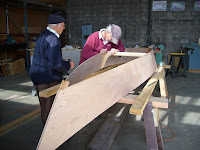 The canoe is called a 6 hour canoe to emphasis its simplicity, originally it would have been built from a single 16 ft sheet of 1/4 inch ply in Canada I have used 4mm ply to reduce weight and have to join 2 sheets together using a scarf joint and here we have the first side cut out then preparing to cut and fix the log chine, we are using epoxy as an adhesive with many screws to temporally hold till the glue dries, all screws will be removed and holes filled later. 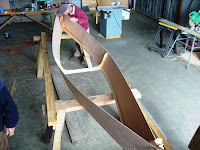 The length of the bottom is 14 ft and 2 ft wide or 610mm wide and about 5 M overall length it is a one man boat but very capable of carrying a child in the bow, with its flat wide mid section it is very stable in the water just not the fastest in the stable.
In the first day of 4 hours we had the shape, the log chine and gunnel fitted the next step will be to fix the bottom and will probably fiberglass the inside of the bottom before fixing it on and eventually glass the whole of the outside too.
There is half a plan to put a deck both fore and aft to cover the flotation foam, the seat will be just aft of the frame, now what would happen if a mast and sail were erected in the bow?